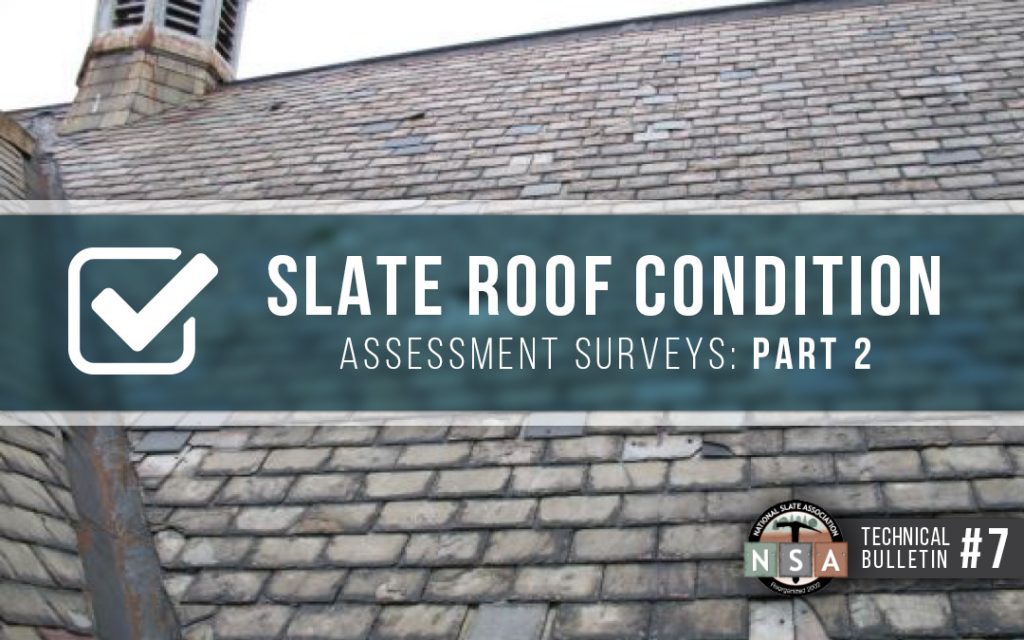 Assessing the Condition of the Slating Nails 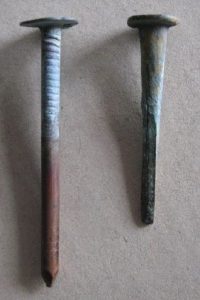 Various types of nails have been used to secure slate shingles over the years. Copper and stainless steel slating nails will typically be found to be in good condition (Figure 10). Steel/iron cut nails and steel wire nails, and the electroplated versions of these, with only a minimal zinc coating, will often be found to be in poor condition with either their heads corroded off (Figure 11) or that portion of the shank located just above the roof deck corroded nearly through. A common manifestation of corroded fasteners is individual slate shingles sliding out of position (Figure 12). 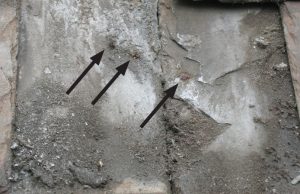 It should be verified whether fastener corrosion is widespread or localized in areas subject to concentrated water flows, such as below dormer valleys or below where a low-slope roof drains onto the slate roof. If the condition is typical and widespread, it is likely time to replace the roof, lest more shingles continue to slide down-slope, or the shingles become subject to blow-off in high winds. If the corrosion is localized, removal and reinstallation of the slates may be possible. 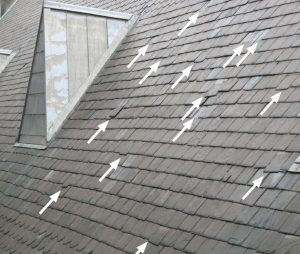 Figure 12: As a result of the corroded nails shown in Figure 11, numerous slates on this Peach Bottom slate roof had slid out of position.

With longer-lived slates such as Peach Bottom and Buckingham, it is possible for the nails to have failed due to poor selection, while the slate shingles themselves still have decades of service life remaining. In such cases, salvage and reinstallation of the slate shingles can be considered. If this course of action is selected, the slate should be re-laid using the same, or less, exposure as the existing to mitigate the visual impact of ghost lines, indicating the original exposure of the slate, on the  reinstalled roof (Figure 13). Keep in mind that exposure and headlap are inversely related and that the change in headlap will always be two times the change in  exposure. Increasing headlap beyond that required is acceptable (within limits, of course), whereas reducing headlap is not (see Figure 13). 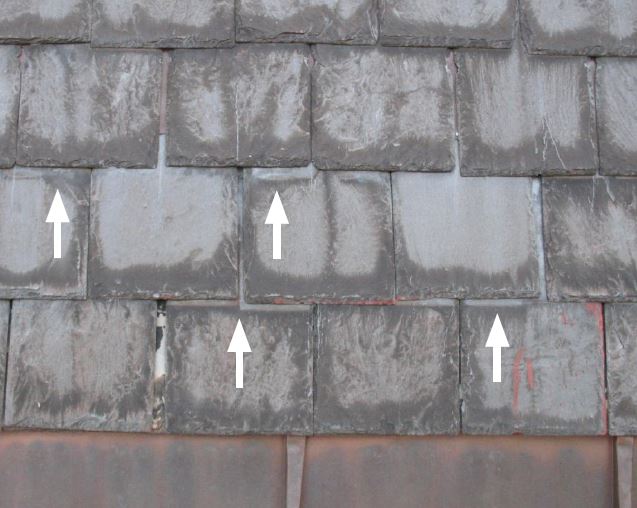 Figure 13: Example of ghost lines on the exposed face of slates that have been reinstalled above a new standing seam copper roof. In the case of partial removal, salvage, and reinstallation of slate shingles it is also important to match the original exposure of the slate in order to maintain the intended headlap. In this case, the extra 1/2” of exposure resulted in the loss of a full inch of headlap; from a 3” headlap down to a 2” headlap. Two-inch headlap is insufficient for the 9:12 slope of the roof. Note too, the lack of patina formation in that portion of the copper roofing located along the drip line of the slate shingles.